Raised in the nuclear plains of Eastern Washington, Sue stole her sister's guitar (abandoned for boys) at 13 and started writing songs about getting out of town and living another life. After graduating from college, fighting forest fires  and getting some heartbreak in, she settled in Seattle and started doing some open mics. It was finally after seeing mutual friend Brandi Carlile play that she got the guts up to put a band together and make an EP. Then a full length CD  "Perfect Chaos". The single "Paper Tiger"from that cd was Runner Up for Song of the Year (Songoftheyear.com ).  From then on, Sue has performed at many of Seattle's most venerable music venues, such as the Tractor Tavern, Conor Byrnes,The Showbox, Sunset Tavern,The Crocodile and in several festivals and showcases including  SXSW, Viper Room,NYC's famed Bitter End, and a  showcase in Nashville. Sue also performed for 6000 Seattle Storm fans at center court, a definite career highlight!!

The most recent album "Little Wildernesses",  was recorded with noted producer, Jonathan Plum at London Bridge studios (Pearl Jam, Soundgarden, Brandy Carlile). Sue is working on new material and  excited to get these songs out in the world to do what they can do for the listener- that's the key for her, connection with the listener on emotions and issues we all share from time to time and how we grow from challenges  ( like pandemics) into who we're meant to be.

Thanks to KBCS FM's Morning Blend host Judy Lindsey for her review of my latest album :Little Wildernesses" :

"Sue Quigley's latest release, "Little Wildernesses" resonates with the sounds of the Pacific Northwest. The intimacy of the recording (produced by Sue with Jonathan Plum at London Bridge) conjures up an evening spent round the campfire in some primal forest in the North Cascades. The honesty of the vocals, and the clarity of the songwriting seem to awaken our sense of what is real, who we are, and how we are connected to one another. I found myself inhabiting these songs for days after initially hearing the record. In a world of endless streaming data and information overload, this beautiful collection of songs evokes a longing  for nature. With some of Seattle's musical stalwarts guesting (Heather Thomas on drums and backing vocals, Kris Orlowski on vocals, amongst others) Sue Quigley has crafted a record of truth and grace. Recommended. Standout tracks: 'Little Wildernesses', 'Outlaws' ~ Judy Lindsay host 91.3 FM KBCS The Morning Blend

Review from The Alternate Root

"Recorded at London Bridge Studios in Seattle, Washington, Sue Quigley surrounded herself with a powerhouse of local talent for Little Wildernesses, her recent release. Art became life when Sue Quigley began writing songs about getting out of town and living a different life in her Eastern Washington state bedroom. She wandered, working as a fire fighter throughout the western United States, picking up the guitar for open mic nights once she settled in Seattle.

Decisions find themselves shifting when signals disappear like smoke as Sue Quigley makes her way into the person she is as well as the human she wants to be, opening Little Wildernesses on the title track. Jagged notes take form to become a western ramble when “Outlaws” wanders into Little Wildernesses while “Rescuer” picks up the rhythmic pace, slowly trudges over an earthbound beat to give wings to “Birds”, and walks the different paths of happiness as it questions direction for “Long Run”. There is a wisdom in the words of Sue Quigley as she delivers her stories in a deep resonance that rings in a confidence that breeds trust in the tales. Little Wildernesses listens to the earth breathe as the sound of nature calls out in “Lake Song” while  Sue Quigley watches “Oxygen” look for a way out and confides “Sometimes I Forget” to the strong current guiding her." 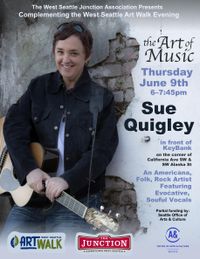 I'll be doing some new songs, older ones and covers from your fave singer-songwriter playlists!!